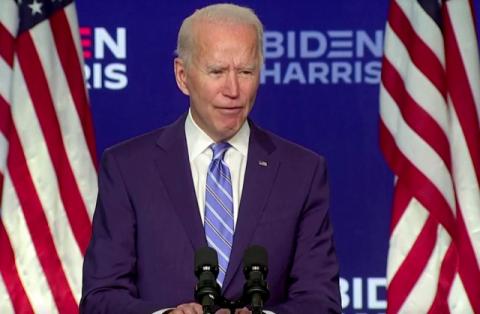 The White House said Biden had given the prime minister "an American-made bicycle and a bicycle helmet made to order by Bilenki Cycle Works, a small family business in Philadelphia." Biden is a native of Pennsylvania.

The White House said the gift was presented as a "gesture of friendship and in connection with their common interest in cycling."

Johnson's office said the prime minister had given Biden a framed photo of a portrait of Frederick Douglas painted on a wall in Edinburgh by British street artist Ross Blair.

Douglas is a 19th-century black abolitionist (political movement to abolish slavery), according to Reuters. He escaped from slavery in the United States and became an abolitionist leader who toured Britain and Ireland, where Biden's family roots are.

The gift is a wink to the "Black Life Matters" movement, Reuters notes. Ross himself, when presenting his work in 2020 on the Internet, does so with the hashtag #blacklivesmatter ("Black life matters").

Biden quoted Douglas in his 2020 speech at a time when the United States was facing contemporary and historical issues of racial injustice posed by a protest movement that has spread to Britain.

Jill Biden received as a gift the first edition of a book by the writer Daphne du Morier, much of whose work took place in Cornwall, where the picturesque English resort of Carbis Bay.

The United Kingdom is the first stop on Joe Biden's first overseas tour. Yesterday, also for the first time, he met Johnson.