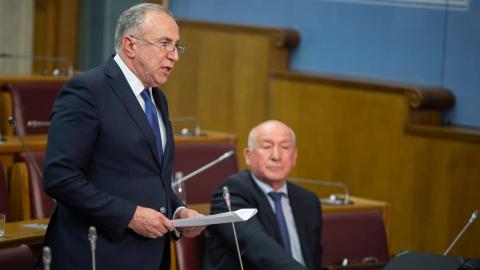 According to the new Prosecution Law, the Prosecution Council will confirm Stankovic's retirement and elect an acting prosecutor for the next six months. Media reported that it will be Drazen Buric, currently the deputy Supreme State Prosecutor.

One of the ruling Democratic Front leaders, Milan Knezevic, said on Thursday that the judiciary needs urgent reform, and prosecutors' retirements are the first step.

"Some prosecutors are retiring today but it's not enough for the judiciary reforms. We also have to see some of them prosecuted for corruption and for ties with the [former ruling] Democratic Party of Socialists," Knezevic told BIRN.

"This system has to be dismantled to the foundations if we want to strengthen the rule of law," he added.

On May 27, the ruling majority voted changes to the law governing prosecution appointments despite concerns about potential politicization raised by the Venice Commission, the Council of Europe's advisory body on constitutional law.

The ruling majority proposed law changes that would have opened the way to the dismissal of the Supreme State Prosecutor and Special State Prosecutor, Ivica Stankovic and Milivoje Katnic.

Both are contentious figures because of their links to the former government led by the Democratic Party of Socialists, DPS, and because of Katnic's key role in the trial of a group of people accused of plotting a coup in 2016.

According to the law changes, the Prosecutorial Council's members will now be elected by the votes of at least 41 of the total of 81 MPs in parliament, while any reputable lawyer can be elected...