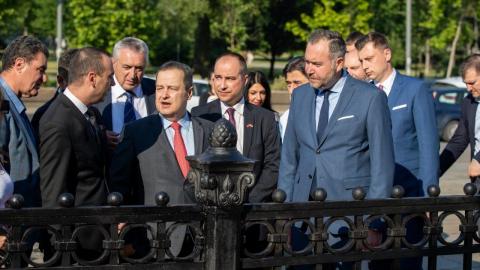 "This is a sincere gesture of friendship", Dacic told the ceremony, adding that, "as of late we have had a series of steps that show what our relations [with North Macedonia] should be - brotherly and friendly - and I wish they stay that way".

The fragment is just part of the 500-meter-long fence that surrounded the parliament in Belgrade from 1936 to 1956.

During former Yugoslavia, when the building served as the Yugoslav federal parliament, part of the fence was removed and transported to Ohrid, where it stayed for the next 65 years, decorating the lakeside villa called Biljana, which was one of the residences of the former Yugoslav leader Josip Broz-Tito.

After the breakup of former Yugoslavia and North Macedonia's independence in the 1990s, the villa became a presidential residence.

Apart from holding historical significance for Serbia, the fence, designed by the famed Russian architect Nikolay Krasnov, is considered a work of art.

The building of the Serbian Government, the Foreign Ministry and the Serbian Archive are also Krasnov's works.

During the ceremony, Dacic said that they had tracked down other parts of the fence as well, saying that one part is being kept in Belgrade's directorate for protection of cultural heritage, while another part inow adorns Beli Dvor "the White Palace" in Belgrade, which was the official residence of the former Yugoslav royal family.

Serbia and North Macedonia have exchanged several gestures of friendship since the...