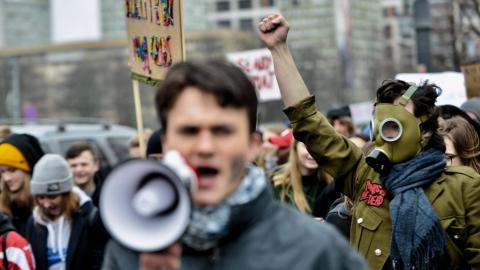 From the start, Czarnek outlined that his goal as education minister would be to free Polish education from what he called "political correctness" and "left-liberal ideology".

"There is no doubt about the domination or even dictatorship of the left-liberal views, especially those radical in content, even totalitarian, which have taken over particularly higher education, but also penetrated secondary and primary schools," Czarnek said in an interview with the Catholic daily Nasz Dziennik soon after his appointment.

The students, it turns out, had good reason to be worried. Half a year into his mandate and Minister Czarnek is on a PR offensive to promote his reforms for the education sector, which essentially revolve around pushing extra nationalist, Catholic and "pro-family" teaching onto an already crowded curriculum.

Many education experts argue that, at a time when children of all ages are under extreme psychological pressure after more than a year of online learning, the effects of the education minister's proposals could be especially harmful.

The planned changes announced by Czarnek - which are yet to become law - will revolve around ridding what he described on Radio Wrocław as an "education of shame" that had dominated for 20 years with an "education of pride".

This will mean in practice: additional history classes, with a special focus on recent Polish history, the "unlawfulness of the EU", and history of the local community and parish; compulsory religion or ethics classes, which in practice means religion, as ethics teachers are in short supply these days; changes to "education for family life" classes, which would force teachers to focus on the "traditional family" with even...