Prosecutor demands 451 HDP members to be banned from politics 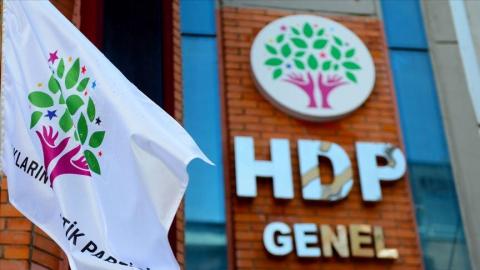 An indictment prepared by a prosecutor for the closure of the opposition Peoples' Democratic Party (HDP) demands that 451 party members are barred from doing politics on charges of violating the constitution.

"It's an 843-page indictment that demands that 451 people are banned from politics. In addition, 69 party members are also listed in the indictment because of their pro-terror statements," Chief Prosecutor of the Supreme Court of Appeals Bekir Şahin told reporters on June 10 in the southern province of Antalya on the sidelines of a conference.

Şahin said the indictment includes all the evidence, information and documents as well as the copies of the HDP members' public statements, recalling that the decision to open a case against the party will be given by the Constitutional Court. The bank accounts of the HDP are also sought to be seized by the state, Şahin said.

Turkey's top court, which has to respond to the Supreme Courts of Appeal within 15 days, has already nominated a rapporteur to carry out a preliminary study on the indictment.

Şahin refiled the indictment seeking dissolution of the HDP on June 7 after his first appeal was returned by the Constitutional Court due to missing details. The indictment calls HDP an undemocratic party that colludes with the terrorist group PKK and seeks to destroy the unity of the state. The HDP denies any terror links.

The HDP and the main opposition Republican People's Party (CHP) have criticized the legal action against the party as a move against the will of the people. The Nationalist Movement Party (MHP) welcomed the move and urged the Constitutional Court not to return it this time.