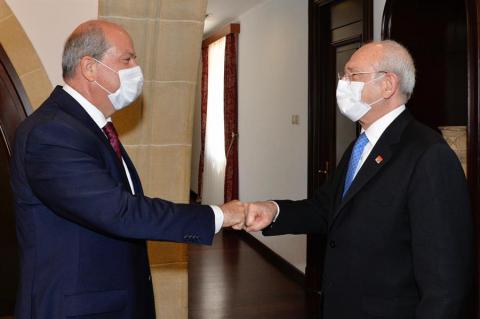 The main opposition leader has stressed that Turkish Cyprus should be recognized as an independent and respected state in the world on a visit to the island after the election of Ersin Tatar as the president of the Turkish Cypriots.

"At the end of 50 years of a struggle, we want the [Turkish Republic of Northern Cyprus] TRNC to emerge as an independent state, to be recognized and to become one of the respected countries of the world. This is our greatest desire," Republican People's Party (CHP) leader Kemal Kılıçdaroğlu said at a meeting with Tatar on June 10.

The CHP stands ready to fulfill any necessary duty to this end, Kılıçdaroğlu vowed.

Kılıçdaroğlu, accompanied by senior CHP officials, paid a visit to the island to meet Tatar, Parliament Speaker Önder Sennaroğlu and the leaders of political parties. He also visited the mausoleums of Fazıl Küçük, the leader of the freedom struggle of the Turkish Cypriot people, and Rauf Denktaş, the founding president of TRNC.

Citing the Cyprus issue as a national cause for all the political parties and beyond political discussions, Kılıçdaroğlu said Turkey is entirely seeking an economically developed and fully independent Turkish Cyprus.

"You are giving a serious struggle for the Turkish Cypriots," the CHP leader told Tatar, recalling the U.N.-led 5+1 Geneva Conference where Turkish and Greek Cypriots as well as three guarantor countries Turkey, Greece and the United Kingdom met to explore where there is a common ground for a new round of talks.

Tatar, for his part, thanked Kılıçdaroğlu for his visit citing the Cyprus issue as a national cause that is very important for Turkey as well.

"What is important is to be able to share Cyprus' governance...