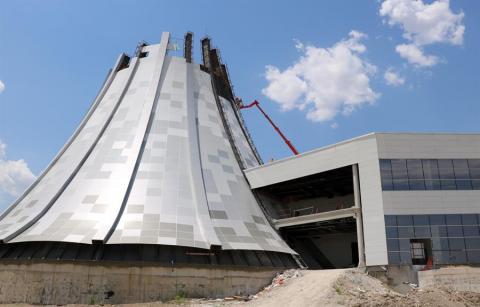 Works are ongoing to complete the construction of the Afyonkarahisar Museum, which will be the future home of the 1700-year-old Kybele statue.

The ancient statue of Kybele, the mother goddess of Anatolia, was smuggled abroad after being excavated in the western province of Afyonkarahisar in 1964 and was brought back to Turkey after 60 years on Dec. 10, 2020, as a result of the efforts by the Culture and Tourism Ministry, the Foreign Affairs Ministry and the Turkish Consulate General in New York.

The statue is currently being exhibited in the Istanbul Archaeology Museum and will be moved to the archaeology museum in Afyonkarahisar once its construction is complete.

Being built on an area of 55,198 square meters, the museum has three floors and five separate blocks.

Stating that the statue of Kybele dates to the third century A.D., Tanır said: "We will exhibit the statue of Kybele Mother Goddess in a special place. This will not be just an archaeology museum. The city has a music museum called the İbrahim Alimoğlu Music Museum, which displays rare works. It will be moved to this structure. Again, we have Turkey's first Egg and Art Museum, which will also be moved here. This museum will consist of many units."

Historians argue that Kybele was a "mother" goddess of fertility and regarded as the mistress of wild nature and that its origins date back to the eighth century B.C. The influence of the goddess was present in the Mediterranean basin, especially Anatolia.

The lions on both sides of the Kybele, who is worshipped...