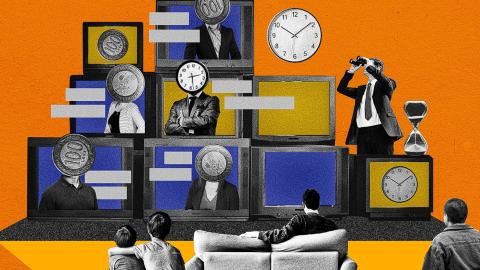 Their main rivals in the opposition Democratic Party had their own propaganda blitz, making the April 25 elections one of the most expensive in history in Albania.

"The financing of political ads campaign at such a record level, mainly by the two big parties, had an extraordinary impact, not only on the media's editorial line but also on voters," said Elvin Luku, professor of Media and Communications at the University of Tirana.

"Albanian media outlets, including national ones, are more susceptible to money rather than objectivity and impartiality in their reporting," he added.

However, such expenditure would not have been possible if broadcasters carrying the ads had respected the limits sets by the electoral code.

This limits the total time for political ads in a selected TV station at no more than 90 minutes for each political party.

The Audiovisual Media Authority, AMA, the regulator that oversees broadcast media, called repeatedly on the State Election Commissioner in the campaign to take action against offending broadcasters; however, the commissioner failed to impose any sanctions.

'The problem is that political parties are not transparent during the most important period - election campaigns," said Rigels Xhemollari, executive director of the local watchdog group Qendresa Qytetare (Civic Resistance).

"During the campaign we cannot measure and react to the way political parties usurp the airwaves in the media [in elections]," he added.

Television ads have always been big-price item in election campaigns in Albania.