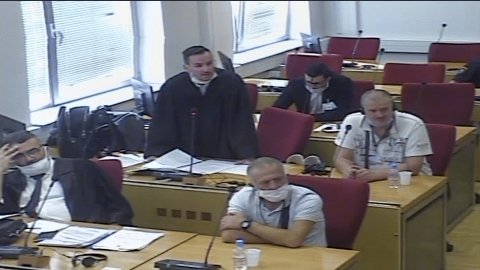 Senad Dzananovic and Edin Gadzo were found guilty of having participated in the unlawful detention of people in the Stela Territorial Defence premises in Alipasino Polje neighbourhood, where more than 100 Serb civilians were held in unsanitary and humiliating conditions, while being subjected to murder, inhumane treatment, rape, disappearances, torture and forced labour, from May to August 1992.

They were sentenced in their capacity as members of the Stela Territorial Defence and special units of the Army of the Republic of Bosnia and Herzegovina, ARBiH, under the command of Jusuf "Juka" Prazina and Samir "Krusko" Kahvedzic.

Dzananovic was found guilty of 20 counts and Gadzo of 11. An acquittal was passed down for 24 counts. Charges in two counts were rejected because Dzananovic had already been sentenced for those crimes in 1994.

Other cases for which Dzananovic was found guilty include the beating of detainees with various items, cutting them with knives, and riding and urinating on them.

According to the verdict, some of the abused civilians went missing without trace and some fainted due to the beatings, laid in pools of their own blood and received fractures in different parts of their bodies.

Dzananovic was also sentenced for having taken witness A to an abandoned apartment and, after having insulted her and put a handgun in her mouth, raped her and...