Envoys expect good performances from their countries in EURO 2020 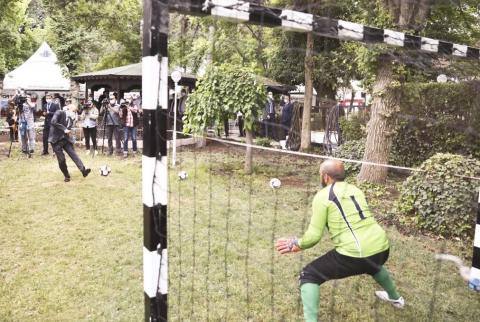 Foreign envoys in Turkey expect good performances from their national teams in EURO 2020, which is set to begin on June 11.

Ambassadors of nations participating in the tournament came together for the 2020 European Football Championship Media Day at the Turkish Sports Writers Association's (TSYD) Ankara chapter.

The Italian ambassador shared his expectations from the national team.

"I think this time the Italian national team is quite strong, one of the best in the qualifying round. So, my expectations are quite high, although you can never be sure in football," Massimo Gaiani said.

Italy will face Turkey in the opening game of the tournament. "Of course, everyone wants to win. But it is a very open game and both the teams are strong. I hope to see them progress in the tournament," he said.

The envoy will follow Italy's matches in the tournament on TV.

The Dutch ambassador said she "expects a lot" from her national team in the forthcoming tournament.

"I think the group stage will give them time to grow as a team. Players play in various clubs, but they know each other very well. They have shown in the past that they can do it and the coach can bring them all together," said Marjanne de Kwaasteniet.

She said football is the most popular sport in the Netherlands, having the "biggest audience, biggest celebrations," and attracting the most attention.