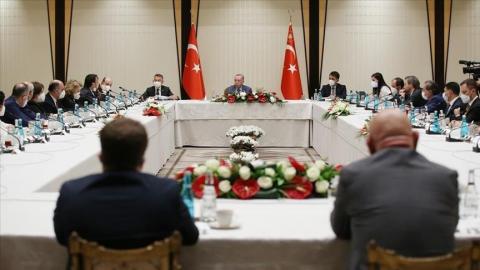 Turkey's president chaired a meeting late on June 10 at the Presidential Complex in the capital discussing solutions to the mucilage problem in the Sea of Marmara.

Recep Tayyip Erdoğan said authorities have intensified inspections at all sewage and solid waste facilities while examining developments at sea.

An academic committee formed by the country's Higher Education Council took part in the meeting to discuss scientific solutions to the problem.

Erdoğan listened to its proposed solutions and recalled the latest measures taken against the problem of increasing mucilage.

The committee released a final declaration evaluating the academic studies on solutions to the problem.

It said the phenomenon occurred because single-celled organisms reacted to changing environmental conditions by discharging their intracellular organic liquids more and/or faster than normal.

Among the changes in the environmental conditions were increasing population density in the region, exposure to domestic or industrial wastes, loss of habitat and increasing sea temperatures due to climate change, it added.

Concerning the results of the phenomenon, the declaration explained that mucilage, which is rich in various pollutants, goes down to the sea bottom and disrupts the structure of the benthic flora and fauna, limiting the lives of the creatures living there.

While increasing the rate of accumulation of heavy metals within the mucilage mass formed, it is also expected...