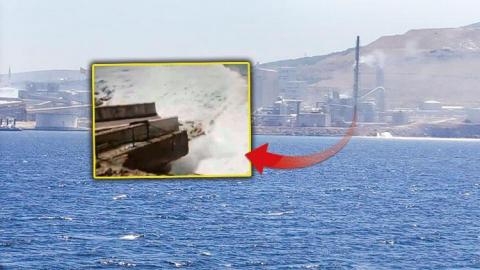 While Turkey launched its "largest and most comprehensive sea cleaning mobilization" ever to save the Marmara Sea from a plague of excessive algae, the discharge of toxic wastewater from a fertilizer factory into the sea without treatment has caused public outrage.

Footage showing untreated wastewater being drained into the Marmara Sea by a fertilizer factory in the northwestern province of Balıkesir's Bandırma district went viral on social media, triggering a public outcry.

Noting that the region where the factory dumps its wastes into the sea is a sensitive area, the experts pointed out that the quality of the water discharged from this phosphate-producing factory should meet the specified standard.

Experts stressed that the facility should be closed immediately until necessary measures are taken and that fines should be imposed if the wastewater values exceeded the specified limit.

"An examination was made in that area and phosphorus values were measured to be three or four times higher for 12 months. When we examined the reason, we came across the phosphate fertilizer factory in the region," an expert said.

Another footage showing the discharge of waste from a wastewater treatment plant in the northwestern province of Kocaeli's Dilovası district into the Dilderesi Creek stirred the outrage.

"For years, tons of wastewater flows from Dilovası organized industrial zone to the Dilderesi Creek and then to the Marmara Sea without being treated properly. Not just wastewater, but officially sewage and industrial water is being discharged," one social media user said.

Speaking to daily Hürriyet, officials from the Environment and Urbanization Ministry reported that inspection teams were sent...