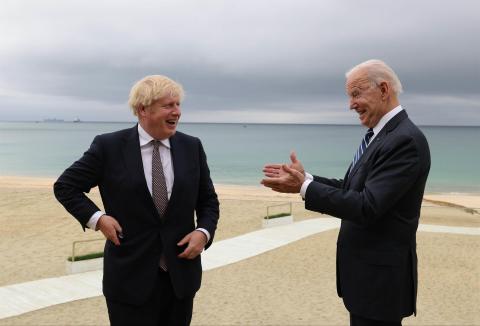 British Prime Minister Boris Johnson hailed the U.K.-U.S. relationship as "indestructible" after his first meeting with President Joe Biden ahead of the G7 leaders' summit which opens on June 11.

"It's a relationship, you can call it the 'deep and meaningful relationship', whatever you want, the 'indestructible relationship'," Johnson said in a BBC interview broadcast on June 11 morning.

"It's a relationship that has endured for a very long time, and has been an important part of peace and prosperity both in Europe and around the world."

During their face-to-face meeting on June 10, the two leaders discussed "about 25 subjects in some detail", including the Brexit-induced disruption in Northern Ireland, he said.

Johnson played down the displeasure of Biden, who is proud of his Irish origins, over London's attempts to reverse the

"Northern Ireland Protocol" which seeks to avoid the return of a border with EU member Ireland but which has disrupted trade between the mainland Britain and Northern Ireland.

"Everybody has a massive interest in making sure that we keep the essential symmetry of the Good Friday Agreement," which ended three decades of conflict in the British-ruled province.

In his meeting with Biden, Johnson said he also raised the case of British teenager Harry Dunn, who was killed in a road accident caused by the wife of an American diplomat. She quickly left Britain for the United States after the accident, claiming diplomatic immunity.

Biden was "actively engaged in the case", Johnson said.

"As you know, he has his own personal reasons for feeling very deeply about the issue," he said, referring to Biden losing his first wife and one-year-old...