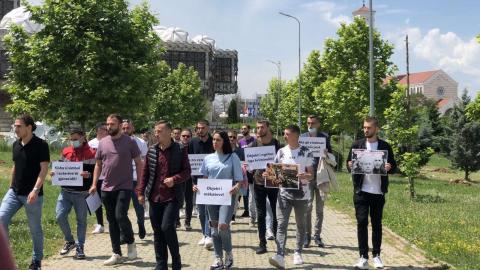 A group of Pristina University students protested on Friday in front of an unfinished church at their campus, one day after the Serbian Orthodox Church held a liturgy in a site, which has been a source of controversy since its construction began in the 1990s.

Erblin Hoxha, from the Students' Parliament. called on Kosovo institutions to respond to what he called "provocations inside the University campus".

"We call on institutions to remove this premise from the campus or turn it to a museum which would display the violence and genocide against the Kosovo population," Hoxha said.

On Thursday, the Serbian Orthodox Church posted some pictures on Twitter of priests holding a liturgy in the church.

The unfinished church, whose construction began in the mid-1990s, when Slobodan Milosevic was attempting to consolidate Serbian control over what was then the Serbian province of Kosovo, has been subject of heated debates in Kosovo for the last two decades.

In September 2017, the Appeals Court granted the Serbian Orthodox Church rights to the land, which was once part of the University of Pristina campus,...