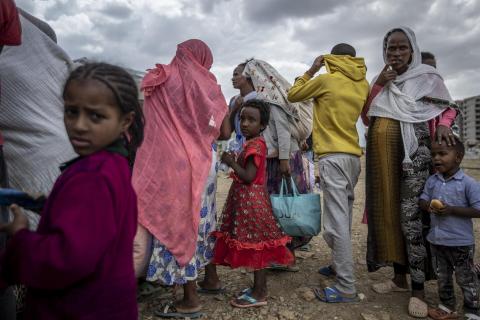 A report issued on June 10 warned that over 350,000 people in Ethiopia's Tigray province are facing famine and over 2 million are just a step away, blaming the dire situation on the ongoing conflict that has forced hundreds of thousands of people to flee, limited humanitarian access and the loss of harvests and income.

The report said the 350,000 people represent the largest number of people facing famine since the 2011 famine in Somalia.

It projects that between July and September the number of people facing famine will rise to over 400,000.
The Integrated Food Security Phase Classification known as the IPC, which is a global partnership of 15 U.N. agencies and international humanitarian organizations, prepared the report. It uses five categories of food security from people who have enough to eat to those facing "Famine-Humanitarian Catastrophe."

In that worst category now confronting more than 350,000 people in Tigray, at least 20% of households face a complete lack of food "and starvation, death and destitution are evident." In addition, acute malnutrition is evident in more than 30% of households and deaths from starvation exceed two people per 1,000 population every day.

The report says over 2 million Tigrayans are just a step below in the "Humanitarian Emergency" category characterized by extreme gaps in food consumption, acute malnutrition and excess mortality in at least 20% of households. And more than 3 million Tigrayans in the "crisis" category are just below that.

U.N. humanitarian chief Mark Lowcock told a virtual high-level meeting on the humanitarian emergency in Tigray organized by the U.S. and European Union on Thursday that "there is famine now" in the region, and warning that "this is going to get a lot...