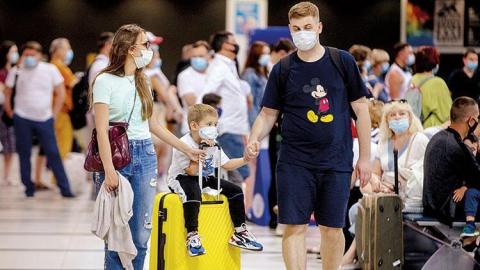 Russian holidaymakers are looking forward to traveling to Turkey as authorities from both sides intensify negotiations on resuming flights that have been suspended due to rising coronavirus cases in Turkey, according to tourism professionals and officials.

Russia banned its citizens from flying to Turkey in mid-April despite the fact that tens of thousands of them had already booked rooms at Turkish accommodation facilities. Later, Russian authorities extended the ban to June 21, saying that daily coronavirus cases in Turkey were not declining fast enough.

Both holidaymakers and travel operators are hoping that flights will resume on July 1 at the latest, said Yuri Barzykin, the deputy head of the Russian Union of Travel Industry (RST), on June 9.

"There are two important and objective reasons for Russian authorities to resume charter flights to Turkey at the beginning of July," he was quoted as saying by TASS at a press conference.

"First, Turkey's success in its fight against the pandemic. The number of cases in the last week is below the criteria defined by the World Health Organization and Russia," he added.

"The second important reason is that more than 500,000 people are waiting to take tours they have bought through travel agencies. This brings a huge financial liability," he said.

Barzykin said in April that most of their customers delayed their holidays after the flight ban instead of canceling bookings. He also warned that Russian companies stand to lose around 5 billion rubles ($65 million) due to the air traffic halt.

"We hope to be compensated for these losses. We also expect the government to initiate a subsidy program for airlines and tour operators," he said.