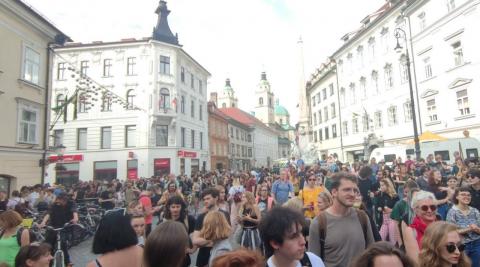 Journalists of Radio Student in Slovenia, one of Europe's oldest and strongest non-commercial radio stations, and its supporters, gathered on Friday for a protest walk in the capital Ljubljana following the recent move of the Culture Ministry to cut state money for the station.

The march started from Metelkova Street, an important site on the Ljubljana cultural, artistic and alternative scene, near the Culture Ministry, and ended at the city centre with a concert.

Radio Student's editor-in-chief, Matjaz Zorec, explained that protest actions began in the middle of the week, when they set up an improvised studio in Metelkova Street that broadcasted "a guerrilla radio program".

"Today's event is the culmination of that program," Zorec told BIRN.

He called the recent decision of the Culture Ministry "financial shock therapy" for the station.

"Those [state] funds were used to finance the majority of our program, and now we will have to restructure that program," Zorec told BIRN.

In late May, the Slovenian Journalists' Association, DNS, criticised the Culture Ministry after it released the results of the annual tender for co-financing media programs in 2021, which revealed that several radio stations, well-known critical newspapers and investigative media outlets will not get any more state funds.

Radio Student said it had also got "ever lower funds" from its founder, the Student Organisation of the University of Ljubljana, SOU. After disputes with SOU at the beginning of the year, it was agreed that 84,000 euros would be allocated to Radio Student; the year before the sum was 120,000 euros.

Last year, the radio got 100,000 euros from the Culture Ministry.