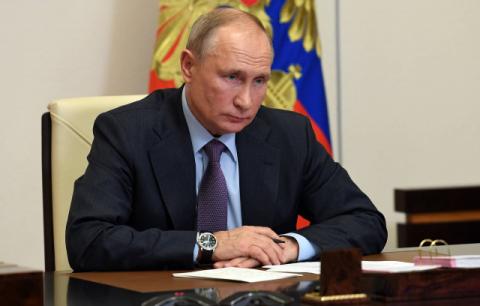 Russian the president Vladimir Putin before the upcoming meeting with ASV President Joe Biden has given an interview to U.S. TV channel NBC, describing former U.S. President Donald Trump as a "bright personality" and Biden as a "career man."

An interview broadcast by NBC on Friday preceded the June 16 Putin-Biden summit in Geneva. This will be their first meeting since Baiden took office.

"Even now, I believe that former US President Mr. Trump is an unusual personality, a talented personality, otherwise he would not have become US president," Putin said.

"He's a bright personality. He may or may not like it. He didn't come from the United States, he wasn't part of big politics before - someone likes it, someone doesn't like it, but it's a fact."  Putin said the current White House landlord "is radically different from Trump, because President Biden is a career man, he has spent virtually his entire adult life in politics."

Putin acknowledged that Biden was "a different kind of man" with his strengths and weaknesses, and hoped that "there would be no impulsive movement on behalf of the current US president."

"We have bilateral relations that have deteriorated to their lowest point in recent years," Putin said in an interview.

Biden has said the United States wants "stable, predictable" relations with Russia and is not looking for conflict. However, the White House has repeatedly emphasized that it does not want to reward Putin with this summit, but a face-to-face meeting is particularly important because of the differences between the two countries.

Asked by an NBC reporter about what Biden said in an interview that Putin could be called a "killer," Putin said that during his presidency he was "accustomed to attacks from all...