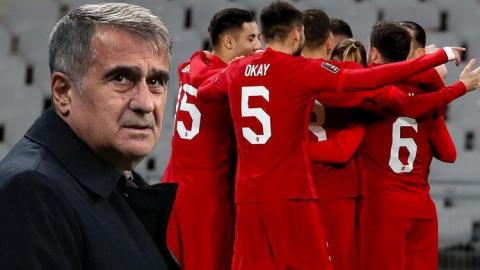 "I expect tomorrow's match will be in a high level technically, tactically and physically," Şenol Güneş said in a pre-match press conference, referring to both teams' high concentration and challenging playing style on the pitch.

"We will try to play against our opponent [Italy] in a combative way as much as we can," the 69-year-old said.

Güneş said that there are Turkish players who play in Italian clubs and this could be an advantage to know their opponents but this is not enough to take a win.

"They do their trainings in the Italian league, they know [Italy's] football culture and working order in this country."

Güneş stated that the whole Turkish national team is ready and cannot wait for the kickoff.

Meanwhile Güneş warned his players for this match as Turkey should focus on teamwork and the Turkish team should help each other on the pitch to survive in this showdown.

"We have to be careful... Otherwise Italy could dictate the match if we lost concentration for a moment."

Güneş said that Turkey's group is a difficult one but the primary task is to be in the knockout stage.

"I hope we will play the EURO 2020 final against Italy," Güneş said, adding that Turkey came to win the title just like everybody else.

Turkey will play against Italy, Wales and...

Excavations in ancient Amos to reveal Temple of Athena