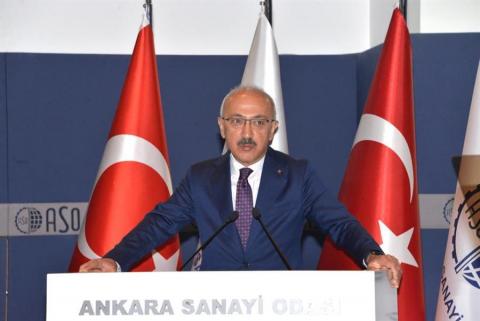 Treasury and Finance Minister Lütfi Elvan vowed on June 11 to continue to fight against inflation to ensure prosperity, saying that the government and the Turkish Central Bank would be in close cooperation for this purpose.

"Relative price structure deteriorates in a high-inflation environment, making it difficult to take long-term decisions, enabling domestic investments and causing inefficient use of sources. It's not possible to talk about stability when industrialists cannot see the future. Thus, we deem the fight against inflation as a war that should be won to ensure the prosperity of the country," he said during a meeting organized by the Ankara Chamber of Industry (ASO).

He underlined that monetary and fiscal policies were implemented in harmony with financial and structural reform targets.

Turkey's annual inflation rate stood at 16.6 percent, and the monthly inflation rate was 0.89 percent in May before coronavirus-related restrictions were eased.

However, the domestic producer price index, which is seen as a leading indicator of consumer price moves in the upcoming months, soared by 38.3 percent on an annual basis and by 3.9 percent on a monthly basis in May.

Meanwhile, Turkey's current account balance is projected to post a deficit of $2.4 billion in April, a survey by state-run Anadolu Agency found on June 11.

The Turkish Central Bank will release the balance of...