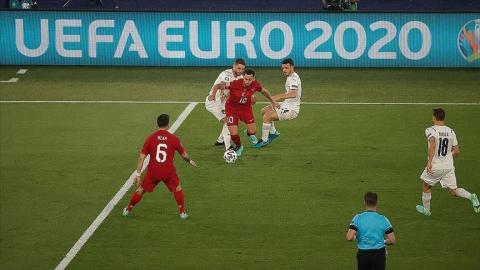 Italy waited a long time for this European Championship to start and then showed on June 11 just how eager the team was to play the tournament opener.

After humiliatingly failing to qualify for the 2018 World Cup, Italy was already back on track with a perfect qualifying campaign of 10 wins in 10 matches. Now Roberto Mancini's team has begun its first major international tournament in five years with a convincing 3-0 win over Turkey.

"It was important to start well and it's satisfying for us, for the crowd and for all Italians," Mancini said. "It was a wonderful evening and I hope there will be many more."

Ciro Immobile and Lorenzo Insigne both scored after an own-goal from Turkey defender Merih Demiral had given Italy the lead- all in the second half.

Demiral redirected a cross from Domenico Berardi into his own net after attempting to intercept the pass. Immobile then poked in a rebound of a shot from Leonardo Spinazzola on another play that began with Berardi, and Insigne later curled one in after a failed clearance by Turkey goalkeeper Uğurcan Çakır.

Immobile thanked his "mamma" for giving him "the sense for being in the right place at the right time" for his goal, while Insigne said the team's togetherness was its greatest strength.

"The coach has created a great group in which there are no starters and bench players and each one of us is always ready to sacrifice for our teammates," Insigne said. "Winning is the most important thing - if I score, even better. It was a great night."

Italy dominated from the start but was denied in the first half by a superb save from Cakir and a decision by the referee not to award a penalty for an apparent handball.