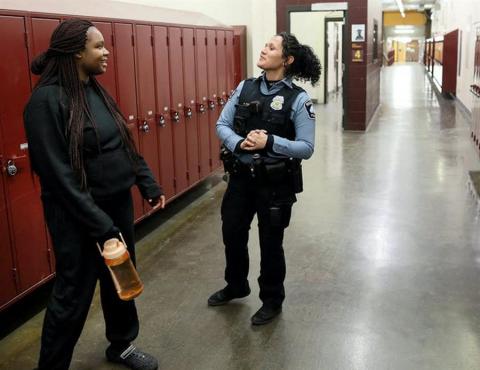 The teenager who pulled out her cellphone and began recording when she saw George Floyd being pinned to the ground by a Minneapolis police officer was given a special citation by the Pulitzer Prizes on June 11 for her video that helped to launch a global movement to protest racial injustice.

Darnella Frazier was cited "for courageously recording the murder of George Floyd, a video that spurred protests against police brutality, around the world, highlighting the crucial role of citizens in journalists' quest for truth and justice," the Pulitzer Prizes said.

Frazier was not giving interviews to the media, her publicist said Friday.

Frazier was 17 when she recorded the arrest and death of Floyd, a 46-year-old Black man, on May 25, 2020. She testified at the trial of former Minneapolis police officer Derek Chauvin that she was walking to a corner grocery store to get snacks with her then-9-year-old cousin when she saw a man being pinned to the pavement, "terrified, scared, begging for his life."

She said she didn't want her cousin to see what was happening so she ushered the girl into the store then went back out to the sidewalk and began recording because "it wasn't right. He was suffering. He was in pain." She kept recording even though she said she felt threatened when Chauvin ignored the cries of bystanders and pulled out his Mace as he knelt on Floyd's neck for 9 minutes, 29 seconds.

Her video, which shows Floyd repeatedly saying he couldn't breathe before going limp, was posted to Facebook hours after it was recorded, sparking outrage in Minneapolis and beyond. It was also a prominent piece of evidence in Chauvin's trial. Chauvin was convicted in April of second-degree unintentional murder, third-degree murder and manslaughter...