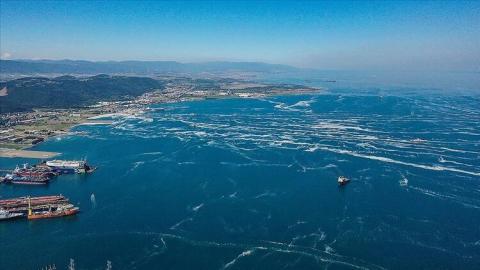 Turkey's parliament has agreed to set up an all-party committee to investigate a slimy, floating mass of yellowish-white sea mucilage that is threatening marine life in the Marmara Sea.

The so-called sea snot, a thick and slimy substance made up of compounds released by marine organisms, has surfaced in waters south of Istanbul, alarming marine biologists and environmentalists.

The mucilage had also infiltrated portions of the adjoining Aegean and Black seas.

In a rare show of unity, five parties represented in parliament agreed on June 10 to form a joint committee that would investigate the cause of the outbreak and propose solutions to combat it.

The 19-member committee would complete the probe within three months.

Speaking to Hürriyet daily, ruling Justice and Development Party (AKP) lawmaker Mustafa Demir said that work continues in all aspects to get to the root of the problem and solve the issues.

Özgür Özel, a lawmaker of the main opposition Republican People's Party (CHP), said that the government that has been ruling the country for 20 years does not have the luxury of saying "this problem was before us."

Meanwhile, a committee released a final declaration evaluating the academic studies on solutions to the problem.

President Recep Tayyip Erdoğan chaired the meeting late on June 10 in the capital discussing solutions to the mucilage problem in the Marmara Sea.

It said the phenomenon...