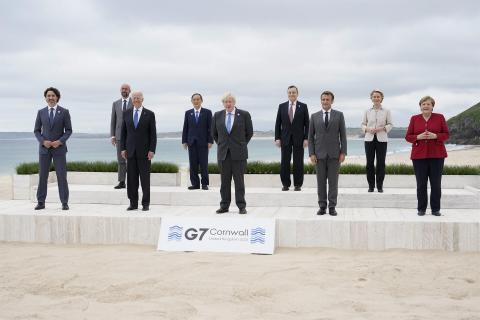 The Group of Seven nations agreed on June 13 to increase their climate finance contributions and meet an overdue spending pledge of $100 billion a year to help poorer countries, calling on other developed countries to join the effort.

In a copy of a joint communique following a weekend meeting of the world's seven largest advanced economies, the G7 said: "We reaffirm the collective developed countries goal to jointly mobilise $100 billion/year from public and private sources, through to 2025, in the context of meaningful mitigation actions and transparency on implementation."

"Towards this end, we commit to each increase and improve our overall international public climate finance contributions for this period and call on other developed countries to join and enhance their contributions to this effort."

"It's not like the world no longer has any problems because of the election of Joe Biden as U.S. president," Merkel told reporters.

"But we can work on solutions to those problems with new momentum. And I think it's very good that we have become more concrete at this G7."

The G7 gathering of leading economies was Biden's first as U.S. president and touted as an opportunity to rebuild ties after the discord of Donald Trump's four years in power.

The summit focused heavily on the pandemic fallout and climate change.

Merkel said Biden's decision to bring the U.S. back to the Paris agreement had made G7 climate discussions "much easier...