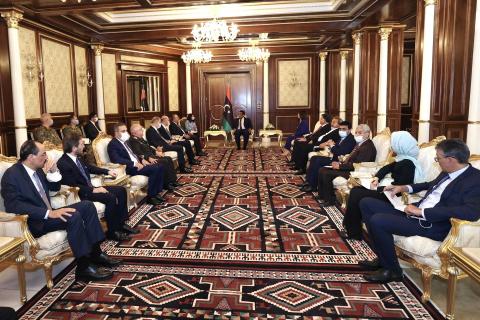 General Khalifa Haftar, the commander of the Libyan National Army (LNA) in eastern Libya, is still posing a threat to Libya's unity and the ongoing peace process, Turkey's top soldier has said, vowing Turkey's continued support to the U.N.-recognized Government of National Accord (GNA) in Tripoli and extended military presence in the country.

"There are still risks, threats and dangers against the current peace climate. There is no such thing as 'accomplished.' Everyone saw the last ceremony by the putschist Haftar group," Defense Minister Hulusi Akar was quoted as saying by Anadolu Agency on June 13.

Akar, who met Libyan Chief of General Staff Gen. Mohammad Ali Haddad and visited the Turkish military mission in Tripoli, said Haftar group continues to be armed from the ground and from the air despite the arms embargo, slamming the EU's Irini operation for closing eyes to the shipments.

The world should not forget about the massacres committed by the Haftar group which has not hesitated to attack against the civilians, the top soldier said.

Turkey's activities in Libya "are very clear in terms of international law, transparency and legitimacy," Akar stated, adding "We don't have anything hidden. Together with our Libyan brothers, we continued our activities here, and we continue to do so."