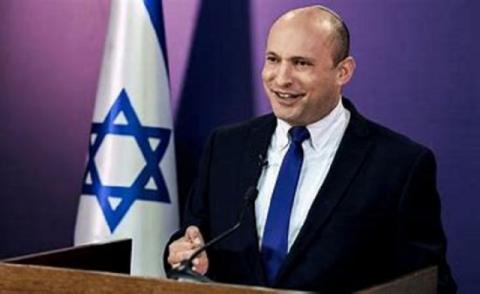 A coalition of ideologically divergent parties ousted on Sunday the hawk Benjamin Netanyahu, Israel's longest-serving prime minister, and formed a new government in a seismic shift in the country's turbulent politics. After holding its fourth general elections in a little over two years this March, Israel is set to have a new face at its helm - the leader of the country's religious right, a politician whose dream is to annex most of the Palestinian West Bank.

The leader of the Yamina party, Naftali Bennett, 49, who made his fortune in the high-tech industry, has agreed to enter in a coalition with his political opponents in order to oust outgoing premier Benjamin Netanyahu, whose 12-year stint in office has made him unpalatable to a large portion of the Israeli public. A former head of an influential umbrella organisation in support of Israel's settlements, Bennett is justifying his risky move with a desire to spare the country the political catastrophe that would be a fifth consecutive election. His participation in what is being described as a "government of change", formed by Yair Lapid, 57, a centrist and leader of the Israeli opposition (Yesh Atid), in early June and involving eight parties from across the political spectrum, will be a real test for the new prime minister, as the coalition relies on a fragile majority of 61 seats in the 120-seat Israeli parliament - the Knesset. A rotational agreement envisages Bennett taking the prime-ministerial position initially, then passing the baton to Lapid in two years.

The hard-right politician, whose inflammatory comments often make media headlines, will have to fend off doubts over his ability to unify a country that's blighted by political fragmentation and division.

"To Israeli citizens I...