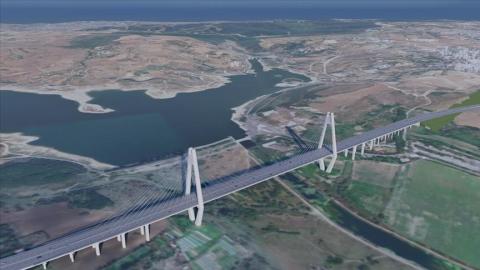 Details emerged on June 13 of the first bridge to be built over Turkey's Canal Istanbul, a planned mega-project connecting the Sea of Marmara to the Black Sea, aiming to take pressure off the crowded Bosphorus Strait.

Foundations for the 1,618-meter (1 mile) bridge are expected to be laid in the last week of June with a ceremony attended by President Recep Tayyip Erdoğan, according to the Turkish Transport and Infrastructure Ministry.

The cable-stayed bridge will be built to provide a crossing around Sazlidere in the Edirne province as part of the Northern Marmara Highway (including the Third Bosporus Bridge) Project's Başakşehir-Bahçeşehir-Nakkaş section (including connecting roads).

As part of the Canal Istanbul project, which was announced in 2011, a total of six new bridges will be built.

The project's total cost is projected at $15 billion, with the six bridges carrying a price tag of $1.4 billion.

Some half a million people will be employed in the construction work.

The construction of the canal, with a daily passage capacity of 185 vessels, is expected to be completed in 2025-2026.

The planned 45-kilometer (28-mile) canal will be built west of the city center on the European side of the Istanbul province.