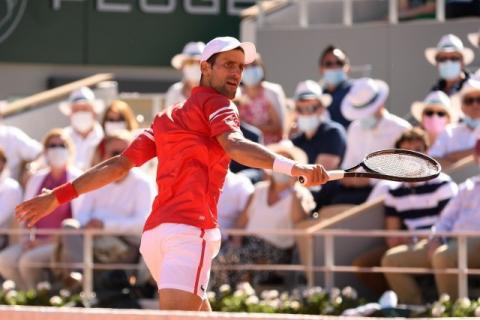 Those 85 seconds, as long as the intonation of the Serbian anthem "God of Justice" lasted, sublimated in Novak Djokovic's smile the greatest award for a masterpiece in the form of the second forged Coupe des Mousquetaires.
A brave tennis musketeer from Serbia, with his knight's sword, pierced the Achilles' shield, wrote one of the greatest pages in the history of tennis, and the lines of a new, modern Greek tragedy, without signing himself as Homer.
Many may not have seen it, but he saw it. Some may not have even dared to dream, but he did. Some did not believe, but he did. No, for Novak Djokovic, dear gentlemen, nothing is impossible. I guess that's clear to everyone now.
While he was standing on the victory podium, while the Serbian flag was being hoisted on the mast at the "Philippe Chatrier" stadium, there was no man whose heart did not tremble and tears of happiness sparkled in his eyes, that hadn't got chills from head to toe, in this tormented country, which has seen everything, but which is proud to have such champions.
Who? Well, Novak and Nikola.
Because could Novak have had more inspiration than the news that spread across all meridians last Wednesday, June 9, that a small Serbia has a guy who is the MVP in the great America, in the NBA empire? Hardly.
Could the great Nikola, before that, have had a better example in recent years than Novak Djokovic and his victories?
And now united in that week of sports happiness, we were all a bit Nikola and Novak, something sweet and warm spilled on our hearts when we watched Novak in Nikola's jersey, in Paris and remembered how happy Nikola was for Nole's numerous victories.

Joker is MVP 😤 Congratulations Nikola, volim te brate. All the best in...