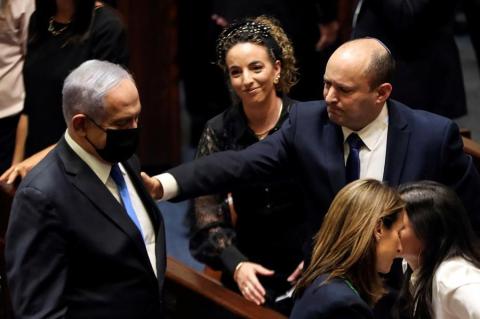 Bennett, a tech millionaire and former special forces commander, was sworn in at the helm of an ideologically divided eight-party bloc united only by disdain for the country's longest-serving prime minister.

Netanyahu, 71, in typically combative style, vowed shortly before his defeat that "if it's our destiny to be in the opposition, we'll do so with our heads high until we take down this bad government and return to lead the country our way".

Beloved as "King Bibi" and "Mr. Security" by his right-wing supporters and condemned as the "crime minister" by his critics, Netanyahu has long dominated Israeli politics.

But on June 13, a vote in the Knesset legislature following weeks of political drama ended his government with a razor-thin majority of 60 to 59 in the 120-seat chamber.

"I look forward to working with Prime Minister Bennett to strengthen all aspects of the close and enduring relationship between our two nations. Israel has no better friend than the United States," he said in a statement.

Delighted revelers packed a square near the Knesset (parliament) in Jerusalem and poured into Tel Aviv's city center to celebrate Netanyahu's fall.

Throngs of people gathered in the coastal city, clapping, cheering and waving flags.

Bennett, 49, told the Knesset before the vote that his government "represents all of...