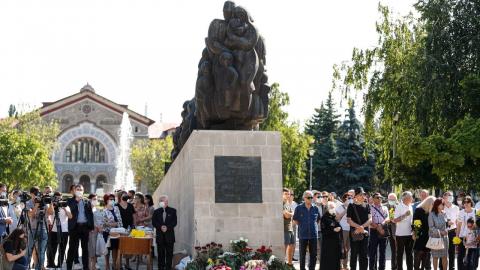 Moldova commemorated 80 years since the first of three massive waves of deportations ordered by the Soviet authorities and executed by NKVD special services.

"It has been 80 years since tens of thousands of people were taken from their homes in the middle of the night. They were dispossessed of their hard-worked wealth, mocked, and, without trial, taken away from homes in inhuman conditions," President Maia Sandu said.

Sandu added that the consequences of this political and social purge remain present even now.

"Survivors and family members of the deportees feel them every day. The whole of society feels them because Soviet power snatched the leaders of our communities from us. Intelligent people and those who had the spirit of entrepreneurship posed a danger to the totalitarian regime," she added.

According to official papers and documents, 18,392 Moldovans were sent to Siberian gulags by train. However, the unofficial numbers could rise to 30,000 people, according to some historical sources.

A few months before their departure on June 13, 1941, the local Soviet NKVD made up lists of people allegedly working with the Romanian authorities and plotting against the Soviet regime, mainly the country's elite. [Moldova became part of Romania after World War I.]

The local lists were to include all former landowners, manufacturers, Russian exiles, merchants, leaders of political parties, and mayors of almost all towns in Moldova.

Moldova was part of Romania from 1918 to 1940. But at the end of June 1940, the Romanian government received an ultimatum from the Soviet Union to surrender Bessarabia, today's Moldova, and the northern part of Bucovina , today in Ukraine, which Bucharest accepted under the threat of a Red Army...