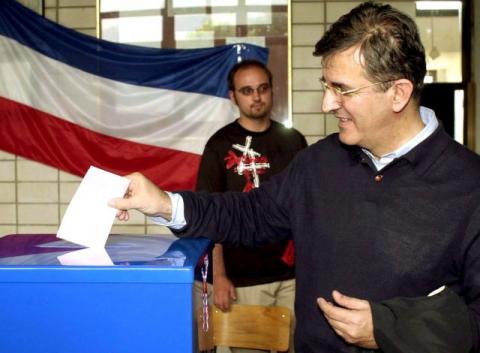 Montenegro's Minister of Justice, Human and Minority Rights, Vladimir Leposavic, told Vijesti on Sunday that  the country had received no news from Belgrade about its demand for the extradition of the former president of the State Union of Serbia and Montenegro, Svetozar Marovic.

Montenegro issued a warrant for Marovic's arrest and in 2019 formally sought his extradition from Serbia. In December 2020, the newly elected government said it had renewed the request, which came after a BIRN investigation revealed the family's business activities in Serbia.

"Since that call, which is the third in a row, we have no news. Of course, this is an issue that the public is interested in. I think it is necessary to resolve this case at a political, higher level, between the heads of state themselves, the heads of government," Leposavic said.

Marovic was the only president of the loose State Union, which lasted from 2003 to 2006, before Montenegro became independent - and was once a close associate to the current Montenegrin President, Milo Djukanovic.

He was arrested in Montenegro in late 2015 and signed a plea deal and was sentenced in September 2016 to three years and 10 months in prison over a string of corruption charges linked to his hometown of Budva.

Marovic was also ordered to repay roughly a million euros. But in 2016, he fled to Serbia to avoid serving his sentence and remains a free man in that country.

Belgrade authorities rejected a recent BIRN request for information on the progress of Montenegro's attempt to extradite the fugitive, saying its laws oblige it to "maintain confidentiality" on the case.

Beside Svetozar Marovic, his son, Milos, also pleaded guilty to involvement in an illegal land sale near...