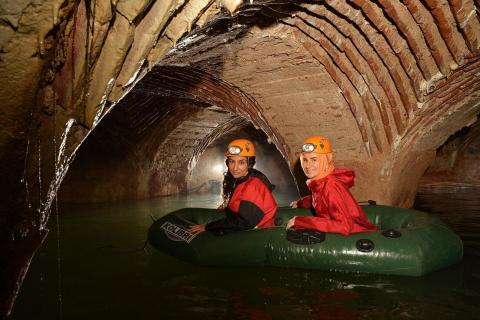 Within the scope of a research project that lasted three years, a Turkish historian toured the historical peninsula of Istanbul and explored underwater cisterns, aqueducts, wells and fountains.

"We scanned the mysterious remains under the Topkapı Palace, the Hagia Sophia and the Hagia Irene as we toured around the places with a boat," Arzu Ulaş told Demirören News Agency on June 12.

The aqueducts under the Fatih Mosque, the Ahmediye Mosque, the Süleymaniye Mosque and the Museum of Archeology have been photographed for the first time, she added.

Historical areas of Istanbul situated on a peninsula surrounded by the Marmara Sea, the Bosphorus and the Golden Horn were inscribed on the UNESCO World Heritage in 1985. Istanbul, which has been the site of human settlement for approximately 8,000 years, served as the capital of the Eastern Roman and Ottoman empires. More than 120 emperors and sultans ruled the city for more than 1,600 years.

Ulaş started her research at the Ottoman Archives, an affiliate of the Turkish Presidency, three years ago and figured out some 285 underground structures.

As she went beneath the layers of the historical peninsula with the help of professional speleologists and divers, she saw that 59 of the 285 underground structures do not exist anymore.

"We photographed some underwater cisterns for the first time. Also, an aqueduct, we call 'The New Khan Waterway,' was scanned newly," she expressed.

It has been rumored for decades that beneath Istanbul there exist underground tunnels all interlinked with each other.

But Ulaş dismissed this rumor, saying, "There is a myth that every tunnel leads to the Hagia Sophia. I did not see such a thing."

When asked what she explored in the...