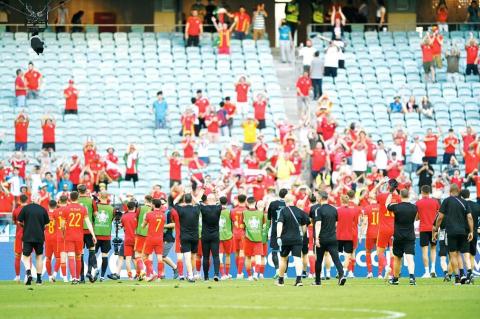 Wales coach Robert Page said he could make alterations for his side's second Euro 2020 Group A match against Turkey in Baku.

Page's men, who reached the tournament's semifinals five years ago, opened their campaign with a 1-1 draw against Switzerland on June 12.

"I was pleased with the performance but it doesn't mean it will be the same personnel," he said.

"We'll have a look for Wednesday, because they [Turkey] pose a different type of threat and a different way of playing," he added.

Page's outfit have beaten the likes of the Czech Republic and Finland in the past year by playing Liverpool attacker Harry Wilson, who was on-loan at Cardiff last season, as a false nine.

In the Azerbaijan capital, Page started with Kieffer Moore, who scored the equalizer, upfront and a four-man defense.

"We also have the option if we want to change it and go to a three at the back," Page.

"We can play a Harry type of forward. We have the options and flexibility which is great," added the former Wales captain who is standing in for Ryan Giggs, absent following his arrest for assaulting two women last year.

Moore, who scored his sixth international goal at the Olympic Stadium, was playing for English fifth-tier Forest Green Rovers when Wales reached the tournament's last four in 2016.