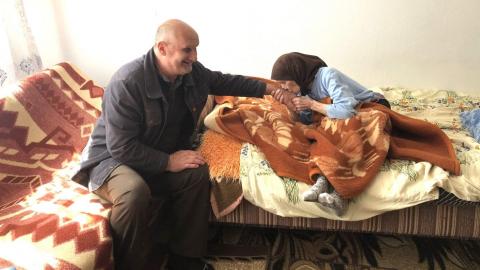 As advancing age reduced her mobility, a Kosovo Albanian from the neighboring village of Strezovc, Fadil Rama, stepped in to help take care of her, bringing her food and other essential supplies.

"Her youngest son could not take care of her because his wife was paralysed, so he begged me to take care of her. And I gave him my word," Rama told BIRN in Kamenica, where Dicic is now living at her son's house.

Her health has deteriorated and she can't move from her bed any more, but Rama's visits continue to bring a smile to her face. "He is my third son," she said.

She can barely raise her head from her pillow, but she kisses Rama's hand and blesses him.

Rama's visits to the family and the help he continues to offer to Dicic are a rare bridge between Kosovo's Serb and Albanian communities, whose relations deteriorated before of break-up of the former Yugoslavia and became almost irreparably hostile during the 1998-99 war in Kosovo.

Her son Slobodan Dicic, 62, said that while the family lived in the remote village, they developed good relations with their neighbours and didn't think much about ethnic identity.

"The war did not make us hostile to each other but it separated us and made us lonelier because people left the villages looking for better living conditions. Nobody wants to work with livestock and herding now," he said.

When the war ended, the majority of families who had been living in Vaganesh left. Some of them went down to live in Kamenica, the others left Kosovo, mostly for Serbia.

'He kept coming here through the snow'

At Slobodan Dicic's house in Kamenica, it's not unusual to hear...