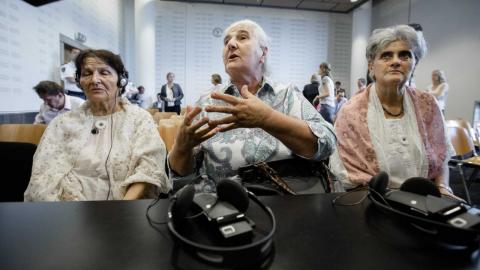 The Netherlands Compensation Commission Potocari opened the doors of its Sarajevo office to potential compensation claimants on Tuesday and its website is also open for applications from relatives of people who were killed after being taken from Dutch UN peacekeeping troops' base in Potocari near Srebrenica in July 1995.

But some of the victims' relatives are refusing to apply for compensation because they are unhappy with the legal settlement imposed by a Dutch court, under which the Netherlands will not have to reimburse all of the costs incurred by the families' lawyers.

Munira Subasic, president of the Mothers of Srebrenica and Zepa Enclaves association, which brought the case before the Dutch judiciary, said she will not apply for compensation for the death of her son Nermin "until our demands are met".

If this does not happen within 15 days, Subasic said, "we will end our cooperation and go to court again".

On July 11, 1995, when the Bosnian Serb Army captured Srebrenica, Dutch soldiers in charge of security in the UN-declared 'safe zone' could not prevent the killings of more than 7,000 Bosniak men and boys.

In 2019, the Dutch Supreme Court ruled that the Netherlands was responsible, to a very limited extent, for the deaths of approximately 350 victims who were taken from the UN Dutch Battalion's base in Potocari on July 13 after seeking sanctuary there.

The Supreme Court ruled that the Dutch Battalion acted illegally because it knew that men from Srebrenica were in serious danger of being attacked or killed. The ruling estimated that if they had been allowed to remain at the base, their chance of survival would have been ten per cent.

According to the ruling, the closest relatives of these 350 victims can...