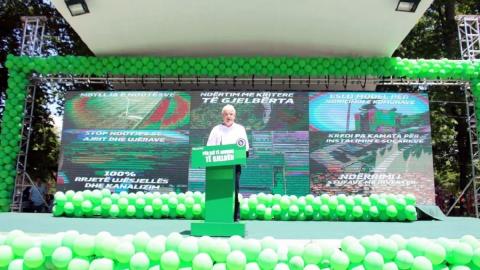 What no one imagined was that Ahmeti's DUI was promoting a profound conceptual and ideological redesign, in effect, becoming a green party.

Party with history of surprises

The head of DUI, Ali Ahmeti gives a speech during the commemoration of the killed NLA fighters on May 5, 2021. Photo DUI

The DUI was founded on June 5, 2002, by former demobilized members of the National Liberation Army, NLA, a guerrilla force formed and led by Ahmeti that conducted an armed conflict with the country's security forces in early 2001.

At that time, ten years after the independence of North Macedonia, Ahmeti said the political solutions for ethnic Albanians to achieve the rights they deserved in state institutions had been found.

The NLA's factorization among ethnic Albanians who make up 25.17 per cent of the population, according to the 2002 census, went hand in hand with the delegitimization of the two most powerful Albanian parties at the time, the co-ruling Democratic Party of Albanians, DPA, and the Party Democratic Prosperity, PPD, which was in opposition.

The armed conflict had lasted about eight months and ended with the signing of the Ohrid Agreement on August 13, 2001. The peace document, mediated and guaranteed by the international community, paved the way for the disarming of the guerrilla force in September that year by a NATO mission, designated "Red Fox".

A year after the NLA uniforms came off, Ahmeti and his men donned politicians' suits and founded the DUI.

When everyone expected a political platform of extreme nationalism, Ahmeti surprised the public by presenting the opposite, a party with a civic concept, open to other ethnicities.

"|Macedonia is my homeland. As much as it is [then president...