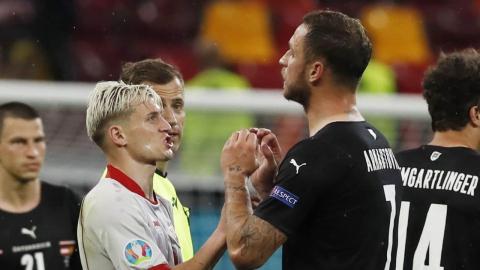 The federation said it "strongly condemns the nationalist rant of the Austrian representative".

Arnautovic became the centre of controversy after claims that during Sunday's European Championship match between Austria and North Macedonia in Bucharest, he shouted "F*** your Albanian mother" at North Macedonia's Ezgijan Alioski.

Arnautovic was seen gesturing and uttering words in the direction of Alioski after scoring in Austria's 3-1 victory. He stopped only after being restrained by his team-mate David Alaba.

After the match, the Austrian star offered his apology both in the Albanian and Macedonian languages, insisting that while there was a heated exchange, he is "not a racist".

"There were some heated words yesterday in the emotions of the game for which I would like to APOLOGISE - especially to my friends from North Macedonia and Albania," Arnautovic wrote on Instagram.

"I have friends in almost every country and I stand for diversity. Everyone who knows me is aware of that," he added.

North Macedonia's Alioski told media that he could not hear what Arnautovic was shouting at him during the match, but that the Austrian player came and apologised to him afterwards.

"I could not hear since the audience was cheering at that moment. After the match, we talked and made amends. He came in the dressing room after the match, he offered me his hand and apologised," Alioski told Macedonian media.

The incident cast a shadow on the otherwise momentous occasion for multi-ethnic North...