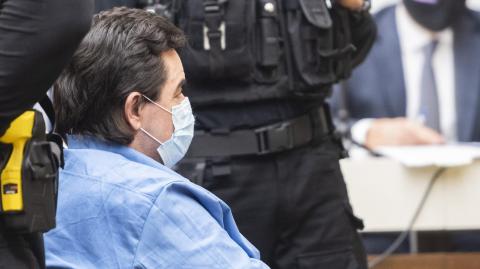 Accused Marian Kocner during a public session at the Supreme Court of the Slovak Republic in the case of the murder of Ján Kuciak and his fiancée Martina Kušnírová in Bratislava on June 15, 2021. PHOTO TASR - Jaroslav Novák

Jan Kuciak and Martina Kusnirova were shot to death in their apartment in 2018, shocking Slovaks and confirming long-held fears about the existence of a nexus of organised crime, oligarch power and political mafia in their country.

Two men, Zoltan Andrusko and Miroslav Marcek, pled guilty and testified over their involvement in the murders, receiving sentences of 15 and 23 years, respectively. Tomas Szabo, Marcek's cousin, pled not guilty, but was convicted and sentenced to 25 years in jail on September 3 last year by a three-judge senate at the Special Criminal Court in Pezinok, though at the same trial corrupt businessman Marian Kocner and his associate Alena Zsuzsova were found not guilty of planning and paying for the murder on the grounds of a lack of evidence.

The state appealed those verdicts and a Supreme Court senate comprised of three judges sided with the prosecution that petitioned the court, quashing the non-guilty verdicts and sending the case back for retrial. While Kocner and Zsuzsova's non-guilty status was annulled, Szabo was sentenced to 25 years in a maximum security prison after being found guilty of another murder, this time businessman Peter Molnar.

Both Kocner, who arrived at the courthouse carrying a green bag with his hair visibly longer, and Zsuzsova, who did not attend, are currently serving long jail sentences for other crimes. Zsuzsova was found guilty of being the middleman in a killing eerily reminiscent of Kuciak's, when Laszlo Basternak, a small-town mayor from southern Slovakia, was shot...