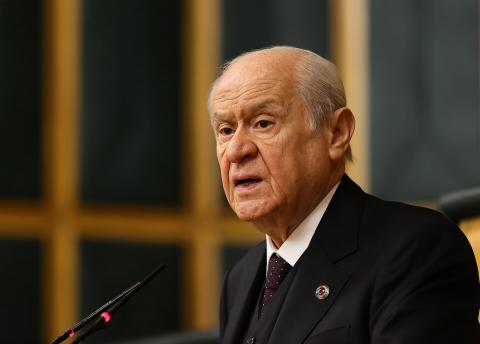 Nationalist Movement Party (MHP) leader Devlet Bahçeli on June 15 said that there is no longer a "bowing and incapable" Turkey in international relations.

Turkey does not "wait for somebody's words" while conducting its foreign affairs, Bahçeli said, speaking at the MHP's parliamentary group meeting.

"There is a reality that Turkey takes the lead, sets the direction and raises its voice," he stated.

Bahçeli said he expects that Turkey and the United States would "break the ice" in bilateral ties after a meeting held between the presidents of the two countries in Brussels on June 14 on the sidelines of the NATO summit.

However, it remains unclear at what level U.S. President Joe Biden sees Turkey as an ally, the MHP leader said.

"The U.S. Secretary of State brazenly stated that Turkey's purchase of the S-400 is disturbing," he said. Bahçeli accused Washington of doing business with the YPG despite talking about a strategic partnership.

Bahçeli suggested that the U.S. "protects the putschists," but wags its finger at Turkey on other issues, such as the purchase of the Russian-made S-400 air defense systems.

Turkey is an "equal" member of NATO, and the Alliance has nothing to say for Turkey's sovereign decision in purchasing a defense system, he stated.

Bahçeli also rejected early elections calls made by opposition parties. "What is the hidden agenda of those that insist on snap elections although we say there will be no early elections?" he said.

The elections will be held in June 2023, Bahçeli added.