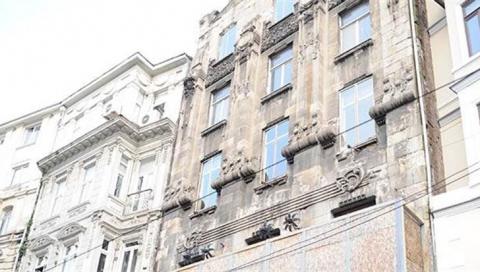 Botter Han, one of the remarkable architectural structures located on Istanbul's Istiklal Street and the first example of the art nouveau movement in the city, will be restored in line with an initiative taken by local authorities.

The country's first fashion boutique, which could not be restored for years due to complications related to ownership, will be brought back to life by the Istanbul Municipality.

Built by the famous architect Raimondo D'Aronco in line with the request of Jean Botter, the private tailor of Ottoman Sultan Abdülhamid, the building is the first modern apartment in Turkey with steel construction and the second building to have an elevator after the Pera Palas Hotel.

The apartment had been used for many years both as a living space and as a tailor shop and boutique until the time when the Botter family's Istanbul adventure ended with the news of the death of the family's young son.

After a sad farewell to Istanbul, the family left the country by selling the apartment and eventually settled in Paris.

Speaking to Milliyet daily, Mahir Polat, the secretary-general of the municipality, emphasized that the Botter apartment, whose windows and exterior were damaged, was a very significant example of the city's architectural heritage.

"We are carrying out facade conservation and restoration works to protect the building," Polat said, adding that support was provided by the municipality to keep the building standing.

"The building also affects the safety of people passing by on the street. There are stones breaking from the front. We will arbitrate them so that there will be no security issue," he noted.