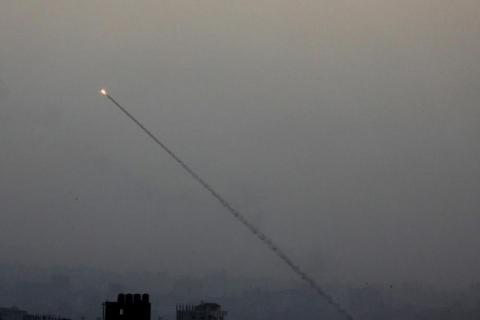 The Israeli side claims that the attacks are a response to flammable balloons, better known as "balloon bombs", launched from Palestinian territory, the BBC reports, adding that the initial trigger for the bombing was a gathering of Jewish ultra-rightists allowed by the new Israeli government.
It is the first major conflict since a truce was struck on May 21, after days of international pressure to end the 11-day bloodshed. The attacks killed more than 250 people, including 68 children, most of them in Gaza.
The latest explosions were heard on Wednesday, in the early hours, reports "Blic", according to the BBC.
The radio station of the Palestinian movement Hamas also reported that an Israeli fighter plane attacked a Palestinian training camp in Gaza, Reuters reported.

Horrific pictures and footage of the bombing are circulating on social networks, with comments "it's happening again", "wake up", "Israel is dropping bombs again".

Several "balloon bombs" were sent from Gaza a few hours earlier, which caused about 20 fires in communities near the border, the Israeli fire service announced.

Gaza is now under attack by the Israeli air force
#GazaUnderAttack#Gaza#SavePalestine#SaveSilwan#SaveSheikhJarrah#غزة#غزة_تحت_القصف pic.twitter.com/8GcLZlrvur