Eurogroup: Support measures, assessment report and debt on the table 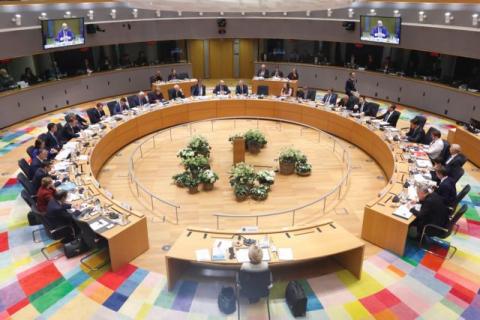 The 10th post-memorandum evaluation report of the Greek economy is expected to be presented during today's Eurogroup meeting in Luxembourg, which will be attended by Finance Minister Christos Staikouras.

Therefore, Greece is expected to take another step towards a positive direction, as another evaluation is successfully completed.

After all, the report was successfully completed two weeks ago and the European Commission gave the green light to the Eurogroup to disburse the € 748 million tranche of Eurozone central bank profits from Greek bonds, which are expected to be pumped into the Greek economy.

Tomorrow, the Ecofin meeting is expected to take place, while the Greek Minister of Finance is expected to participate in the annual meetings of the Boards of Governors of the European Stability Mechanism (ESM) and the European Investment Bank (EIB), as well as to hold contacts with European officials.

This afternoon, Mr. Staikouras will go to the headquarters of the ESM, where he will meet with the Executive Director Klaus Regling and high-ranking executives of the Mechanism. A visit to the headquarters of the European Investment Bank will follow, where he will meet with EIB President Werner Hoyer and senior officials of the Bank of the European Union.

Tomorrow, Thursday, Mr. Staikouras will take part in the annual meeting of the ESM Board of Directors, at which the annual report of the Mechanism for the financial year 2020 will be approved. Eurozone finance ministers will discuss the 10th Assessment Report on European Institutions, which was successfully completed two weeks ago under the Enhanced Surveillance regime that Greece entered in the summer of 2018.

The Eurogroup will also meet in an expanded format,...

SZ – Greece is the “New Mallorca”

The candidacies for the “prime” real estate in Gournes, Heraklion will be announced today