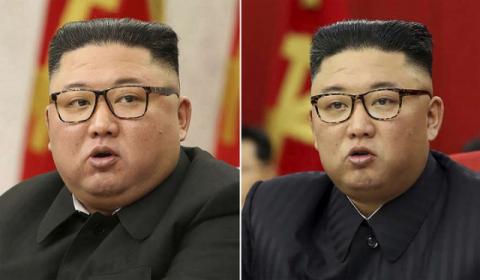 The health of North Korean leader Kim Jong Un has long been a source of morbid fascination in rival South Korea, which sits in the shadow of Kim's 1.2-million-strong army and his growing arsenal of nuclear-armed missiles.

Has he gained even more weight? Is he struggling for breath after relatively short walks? What about that cane? Why did he miss that important state anniversary?

Now, the 37-year-old faces fresh speculation in the South about his health again. But this time, it's because he's noticeably slimmer.

Kim's health matters in Seoul, Washington, Tokyo and other world capitals because he hasn't publicly anointed a successor who would control an advancing nuclear program targeting the United States and its allies — if he is incapacitated. North Korea, never open about the internal workings of its leadership, has over the last year shut itself up even tighter to protect against the coronavirus pandemic.

In recent state media images, including those published on Wednesday, Kim appeared to have lost a large amount of weight. The strap on his fancy watch is tighter, and his face thinner. Some observers say Kim — who is about 170 centimeters (5 feet, 8 inches) tall and has previously weighed 140 kilograms (308 pounds) — may have lost about 10-20 kilograms (22-44 pounds).

Kim's apparent weight loss is more likely an attempt to improve his health, rather than a sign of illness, according to Hong Min, a senior analyst at Seoul's Korea Institute for National Unification.

"If he was experiencing health problems, he wouldn't have come out in public to convene the plenary meeting of the Workers' Party's Central Committee," a major political conference this week that is expected to last two to three days, Hong said.