Solidarity Under Fire: The Legacy of Grassroots Aid Missions to Bosnia 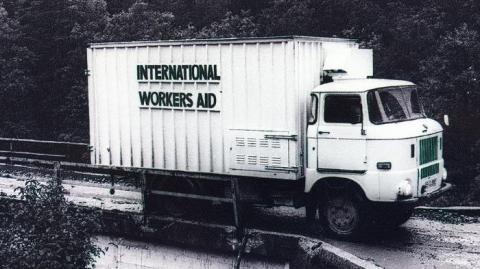 Belgian-born, Sarajevo-based Moll said that he wrote the book to preserve the memory of the grassroots activists who were involved in non-governmental aid initiatives.

"We often talk about the passivity and also complicity of the international governments and the UN, who did nothing to stop the war and the ethnic cleansing in [Bosnia and Herzegovina]," he told BIRN.

"But at the same time we forget that there have been tens of thousands of individuals in many European countries who disagreed with that passivity, who strongly criticised their own governments, and who tried to show solidarity in a very concrete and pragmatic way," he added.

Moll said that some of the IWA's activists had only just turned 18 when they began to deliver humanitarian supplies by truck to the northern Bosnian mining town of Tuzla while the war was still raging.

The IWA organised more than 30 food convoys to Tuzla between 1993 and 1995, as well as supporting other projects including the creation of a trade unionists' magazine and the opening of a women's centre in Tuzla.

Moll explained that the IWA also had ideological motives - "they wanted to support those who were defending the multi-ethnic idea of Bosnia and Herzegovina, and as they were not a very big organisation, they focused their activities on Tuzla, because it was a town with a strong workers' tradition and because there the multi-ethnic spirit was particularly strong".

"I was very impressed by them, even more as the persons I met are modest and self-critical, and they do not walk around bragging 'See what I did during the war'," he said.

'They risked their lives to help us'

International Workers Aid activists unload supplies at a warehouse in Tuzla in 1994. Photo:...