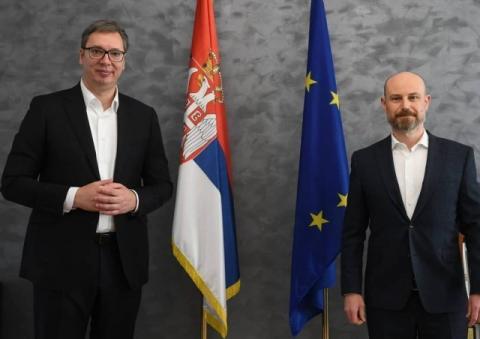 President of Serbia sent that message after Bilik stated on June 13 that the joint military exercise of Serbia with Belarus and Russia does not help Serbia's progress in European integration.
I am a politician as well as Serbian President Aleksandar Vui, said Bilik, adding that he believes that it is important to have an open and honest conversation on topics that can be difficult sometimes.
He reminds that this week the sanctions will be discussed, which will be targeted by the authorities in Belarus "after the state terrorism that made the kidnapping of the EU flight between the two EU countries, Athens and Vilnius by the Belarusian forces".
"My statement was that while we are talking about an important interstate conference to be held on June 22, holding a military exercise at that time with Russian and Belarusian special forces in Russia is a signal that a number of member states will not look positive on that", Bilik said.
He notes that he is only trying to openly convey the mood in Brussels on that issue. "My task as the European Parliament's Rapporteur for Serbia is to work openly and in a constructive way, on relations between Belgrade and Brussels, between Serbia and the European Union institutions. My comment was given as a friendly message, which underlined that this is an important issue. I would never question what Serbia decides to do, because Serbia is a sovereign state and it is a free choice of Serbia", Bilik said.
He added, however, that it was important to point out that some of these choices could have consequences when it comes to what he considers, and what the Serbian government also considers a strategic decision, and that is accession and EU membership. In that sense, he notes that the issue of foreign policy...