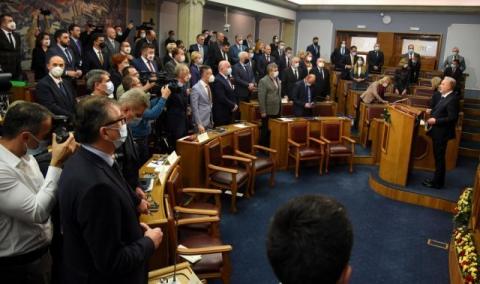 Krivokapic told reporters in the hall of the Parliament of Montenegro, after he left the session at which his initiative for the removal of the Minister of Justice, Human and Minority Rights, Vladimir Leposavic, was discussed due to his views on Srebrenica.
He added that the procedure is clear: "You can ask for trust in the Government or you can go to new elections", RTCG reports.
Krivokapic estimated that maybe the time has come for Montenegro to choose, as he stated, the best way.
"The only way that can lead Montenegro to a more certain future is what the victims are doing, and that is the members of the Government, to whom I, by coincidence, am the leader," Krivokapic said.
Speaking about the initiative for the removal of Leposavic, he said that he proposed "what is completely natural", and that is to ask for a declaration of confidence in one minister and that he followed the procedure according to the Constitution.
He also criticized the solutions in the Constitution, because, as he said, he thinks that there are different ways of solving that problem. When asked why he did not wait for the Assembly to appoint the director of the National Security Agency (ANB), Krivokapic said that he did it because it is another obstruction.
"We sent a request to the Assembly in a timely manner to submit its opinion," Krivokapic stated.
He added that the director of the ANB is a man of all citizens and that the fact that he proposed his appointment is another question.
"He should work in the interest of all of us, not me as prime minister, not any party," Krivokapic said. Asked why the Government gave agreements for some of the ambassadors without the consent of President Milo Djukanovic, Krivokapic said that they did...