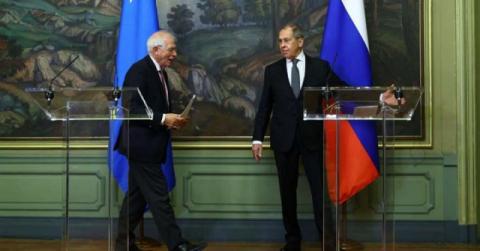 He said the 27-nation bloc must become more "robust and resilient" and apply a mixture of pushing back, constraining and engaging Russia to try to make the relationship with Moscow more stable and predictable.

"The European Union needs to be realistic and prepare for a further downturn of our relations with Russia which are right now at their lowest level," Borrell told reporters.

"This further downturn is the most likely outlook for the time being."

He was commenting on a 14-page report by the executive European Commission on relations with Russia which will provide the basis for a discussion of strategy on Russia at an EU summit next week.

Some member states also fear that the Nord Stream 2 pipeline, being built to bring natural gas from Russia to Germany, will increase EU energy dependency on Moscow.

The report describes Russia as an important challenge for the EU and cites the jailing of Kremlin critic Alexei Navalny and legal moves against groups linked to him as part of a "systematic crackdown" on human rights and fundamental freedoms.