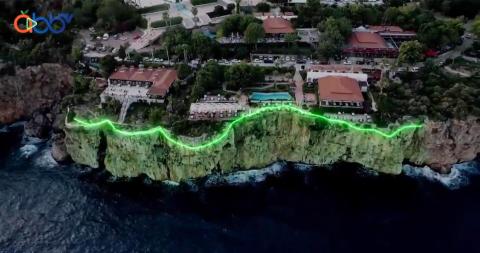 The metropolitan mayor of the southern province of Antalya has called off a project to illuminate the world-famous sea cliffs of the city as inhabitants strongly opposed the idea.

"We will not ignore the wishes of our people; we will give ear to their ideas. We have decided to give up the project," Muhittin Böcek told Demirören News Agency on June 16.

The municipality announced the project to illuminate the cliffs on their social media accounts in March. But social media users opposed the idea, saying that the sea cliffs would look like nightclubs.

Some scientists also criticized the project, saying that illuminating cliffs would cause visual pollution and hurt the natural environment.

The cliffs are home to various bird species, endemic plants and Mediterranean seals whose population has decreased in the previous years to some 700.

Receiving criticism again of the project, the mayor announced on June 15 that the project has been canceled.

"The project was part of one of the promises I made during my election as the major of the city. We took all necessary official permissions for it as well. But I have decided to take care of the concerns that people have," Böcek noted.

Over the years, many people fell from the cliffs while watching the view and died.

According to the mayor, the purpose of the project was to create a security barrier for people to help them stay within safer limits while enjoying the beauty of the cliffs.

"Our motto is 'We Can Do Together.' We try to make the best decisions for the sake of the city," he said.

"We value all constructive criticism," he added.