Putin and Biden won’t be friends but see path together 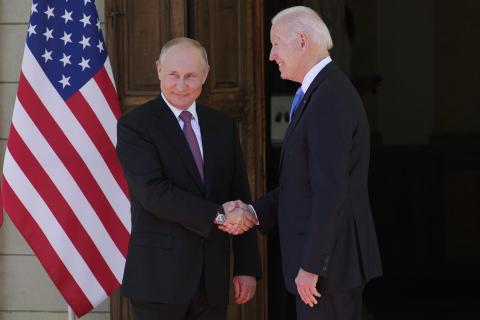 There was no talk of gazing into Vladimir Putin's "soul" and the Russian president didn't try to gaslight a rookie U.S. leader.

Instead, Putin's first summit with the fifth U.S. president of his tenure, Joe Biden, was about mutual respect - and the meeting in Geneva could, both of them said, lead to a more predictable, if still tense, relationship.

In contrast to his predecessors, Biden made no suggestion he expected to reset the relationship and he has already piled pressure on Russia over concerns including alleged election meddling, attacks by cybercriminals against the Colonial Pipeline and other U.S. infrastructure and over the poisoning and jailing of dissident Alexei Navalny.

But after earlier remarks that included calling Putin "a killer," Biden on the eve of the summit described the Russian leader as "a worthy adversary" and at a news conference afterward said that they would see where they had common interests.

Putin, who at his 2018 summit with Donald Trump in Helsinki was widely seen as dominating the reality television star turned president, called Biden "a very experienced politician" who was able to speak in rare detail in the "very constructive" more than three hours of talks.

Similar to his view of Chinese President Xi Jinping, Biden "doesn't trust them but he does expect Russia will act in its interest and the two countries have some interests that overlap and where we should work together," Bremmer said.

Bremmer said the test of the relationship will come afterward.

"I want to see that in the next three months we have...