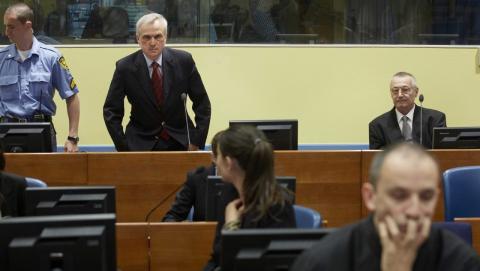 The first-instance verdict in the retrial of Jovica Stanisic and Franko Simatovic in The Hague is scheduled for June 30, the Mechanism for International Criminal Tribunals said on Thursday.

Stanisic, the former head of Serbian State Security, and Simatovic, his former deputy, are being retried for alleged participation in a joint criminal enterprise whose aim was the forcible and permanent removal of the majority of non-Serbs, mainly Croats and Bosniaks, from large areas of Croatia and Bosnia and Herzegovina in the period from 1991 to 1995.

They are accused of "directed and organised the financing, training, logistical support and other substantial assistance or support" for Serbian State Security special armed units and other Serb forces, such as paramilitary groups, that were involved committing crimes during the wars in Croatia and Bosnia and Herzegovina.

Both men have pleaded not guilty.

The court said that the defendants, who are both currently on provisional release, must return to the United Nations Detention Unit in The Hague by June 24.

It also said that the Serbian government is obliged to "designate authorised officials… who shall accompany Stanisic and Simatovic from their residence and shall deliver them into the custody of the Dutch authorities at a Dutch airport in the Netherlands".

Experts have said that the verdict in their trial could establish the facts about Serbia's much-denied direct involvement in the 1990s conflicts in Croatia and Bosnia and Herzegovina.

During closing arguments in April, the prosecution urged the court to sentence Stanisic and Simatovic to life imprisonment, while the defence called for an acquittal.

Stanisic and Simatovic were initially acquitted by the court in May...